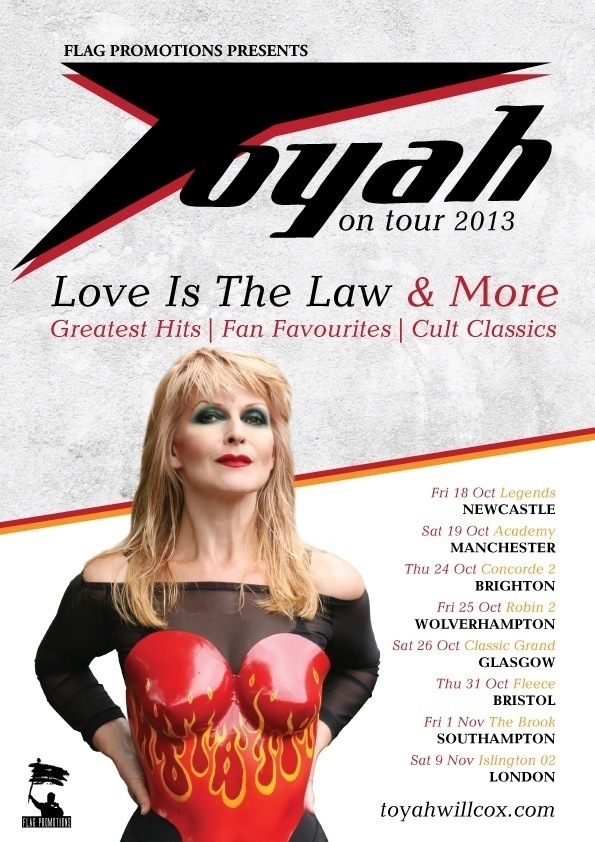 Today, Toyah announces the eagerly awaited details of her autumn tour which celebrates the thirtieth anniversary of the 1983 album Love Is The Law alongside material from her latest studio album In The Court Of The Crimson Queen and a selection of her most famous and well loved songs.

The Love Is The Law & More Tour follows on from two years of successful UK live dates which have revisited the cult classic beginnings of Sheep Farming In Barnet and The Blue Meaning through to the Platinum-selling Anthem and the critically acclaimed The Changeling.

The seven UK live dates will see Toyah perform the 1983 hit single Rebel Run, from Love Is The Law, as well as other songs from the same album for the first time in thirty years.

The concert set list will travel through the decades musically and bring fans and gig goers right up to the present day with “Sensational”, which was recently used in a major UK television advertising campaign (Weight Watchers) and Toyah’s first ever digital single Latex Messiah which hit no.6 in the iTunes Rock chart.

Subtitled Greatest Hits | Fan Favourites | Cult Classics, the tour will also be a chance to hear the classic top ten Toyah chart hits It’s A Mystery, Thunder In The Mountains and I Want To Be Free. Alongside this will be a cherrypicked selection of fan-loved album tracks, b-sides and often songs which have never been performed live in concert ever and only heard on their original albums.

After sell out shows and rapturous reception across the UK in the past two years, Toyah is delighted to be hitting the road again with her full live band to present a lively, colourful show which celebrates her songbook from 1979 to the present day.

The tour kicks off in Newcastle on Friday 18 October and takes in Manchester, Brighton, Wolverhampton, Bristol and Southampton with a tour finale in London at Islington’s O2 Academy. Tickets are on sale now…