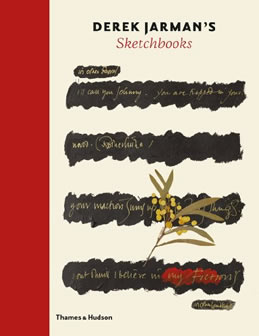 Toyah acted in two of Jarman’s features films in the roles of Mad in Jubillee and an Evening Standard Best Newcomer Award-nominated performance of Miranda in the director’s re-imagining of Shakespeare’s The Tempest. Toyah wrote the piece for Chapter 3 ‘Jubilee to The Angelic Conversation 1978-1985’.

Legendary filmmaker Derek Jarman recorded his life and work in highly detailed sketchbooks. Encompassing both the private and the professional, these offer a personal view into the life and career of a highly influential filmmaker and artist.

Drawn from the collection of handmade books that Jarman gave to the British Film Institute shortly before his death in 1994, Derek Jarman’s Sketchbooks showcases the most insightful and beautiful pages.

Each of the original volumes is composed of drawings, photographs, and cuttings; pressed flowers are set beside scrawled ideas, and carefully penned poems accompany typed and edited working scripts. These once-private books are an intimate pictorial record of the detailed planning and research and the creative and emotional engagement behind every scene in Jarman’s films.

Further details of the book at Thames & Hudson