I hope you are all managing to enjoy the summer. I see another heatwave is on its way in 7 days.

For me the past four weeks have been about Press/ TV and dealing with the HEAT. I never thought I’d say this but I am starting to find anything over 25 degrees hard to work in.

On the hottest day of June I was recording a new Voice over campaign for SunLife at home and the whole session dropped…..lost, as the internet malfunctioned in the heat. Not a good day!

With the release of SLAVE TO THE RHYTHM, The ANTHEM TOUR and Billy Idol’s Road Side Tour there is a lot of promotion to do.

I have already started preparation for the Billy Idol tour. My costume is ready, the set list will be an easy one, we are on at 7.30pm and play for thirty minutes, our band repertoire is pretty extensive so I look forward to changing the set for every show. One thing is certain…we are going to give the audience thirty minutes of high octane music.

One of the most exciting things last month and it was a month of surprises, was a phone call from the legendary Trevor Horn, who produced ABC/ FRANKIE GOES TO HOLLYWOOD/ ART OF NOISE / GRACE JONES plus so many classics asking me to re-make RELAX with him.

Trevor had heard the POSH POP THREE’s version of Slave To The Rhythm and liked it a lot. When I told Frippy he wanted to be part of Relax too.

On the day I was to do the vocal both Simon Darlow and I where so nervous we snuck into the studio 3 hours early and put a vocal down, I am so glad we did this, no way I could have sang cold in front of Trevor Horn for the first time in my entire career.

Then the following week Trevor asked me to come to London to do the harmonies. When we arrived at his studio near Camden he played us the mix as it was so far and it was brilliant, so brilliant I had no nerves what so ever putting all the harmonies in…..what a great session. The track is romantic and beautiful.

His production on my voice is one of the best sounds I’ve heard, firstly his microphones are the worlds best for a singer but he has enhanced the richness of my lower register. A lot of the world’s great producers say it isn’t their job to improve on a singers voice, the singer has to improve their own voice by being fully vocally trained and studio ready. I pride myself in that.

Trevor’s original intention was for the vocal on this track to sound like AI but the label rejected the idea, that’s when he called me in, it now sounds like the best ever ME.

Its prime release is in Germany but its so radio friendly I hope it gets play worldwide. 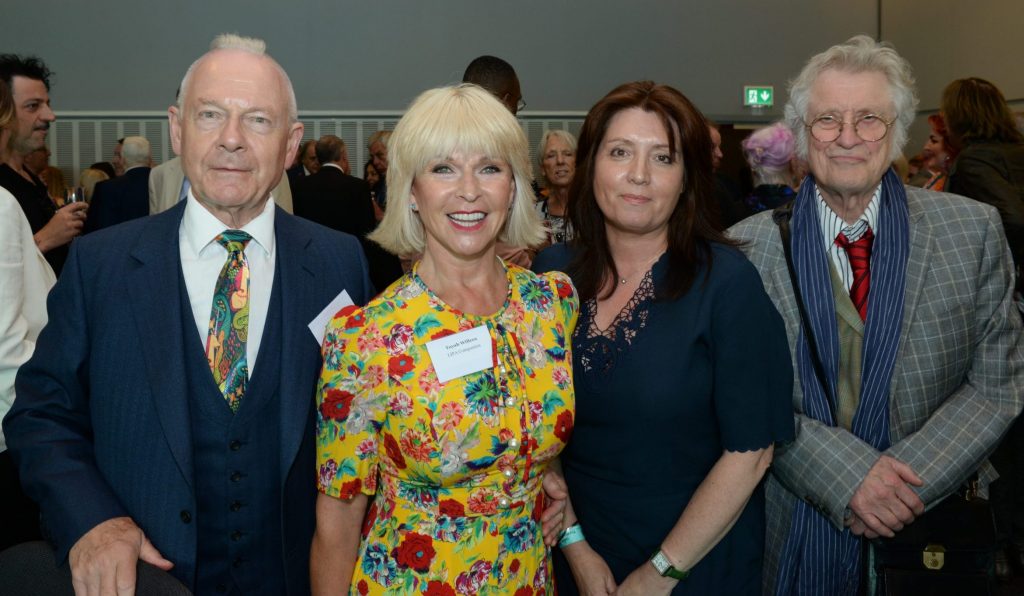 Frippy came with me to the LIPA GRADUATION ceremony in Liverpool last week.

My hubby is always reluctant to “go out”, but he was so excited to see Sir Paul Macartney and Noddy Holder.

Noddy always holds the room with a million brilliant stories to tell.

When it came to entering the hall at the ACC LIVERPOOL Fripp didn’t realise we would be going in a line following Sir Paul and that there would be a camera on us all.

The room erupted with screams and cheering, I could tell Robert was profoundly moved and he said he would come again BUT he wouldn’t except a fellowship…….I WILL BLOODY MAKE HIM. Robert turns every award down and he will regret it in later years.

Liverpool was a gloriously bright, modern and energetic place. We only had one night at the Hope Street Hotel but we felt as though we’d had a week’s holiday.

Over last weekend we shot the video for Slave To The Rhythm, using our next door office construction as a set.

It works really well, as a reference to the rhythm of industry and the hard cold metal and stone verses the vulnerability of flesh.

Neil, our touring lighting person did a fab job of rigging the lights and doing the light design.

Lee Jackson my touring driver/ security and social media observer was on sound and our new neighbour Richard Hudson was on camera and co directing with me as well as over seeing the creative design.

We had five hours to complete in and everyone was heroic and brilliant, the night before I was on stage in Bacup and after the shoot it was straight back into the studio for the reworking of CRIMSON QUEEN.

We managed to get it all done and edited within two days. The premier will be on Toyah At Home on the 13th August…..YEAH!

Today I play R-FEST on Blackpool Promenade, tomorrow Belfast Lets Rock (there’s a few issues with flight but I think we will get there, I am travelling with Chesney and Carol Decker), then up to Durham for Stone Valley Festival North…..It’s busy!