I am intrigued to read my husband’s diary blogs on dgmlive.com where he regularly tells stories that I wait for him in the dark recesses of our home during the early hours to JUMP OUT at him, to scare him witless. What he never mentions is he does it to me too.

I mention this as he is getting Face book comments that I might give him a heart attack…HE MIGHT GIVE ME A HEART ATTACK! It is a revelation to read about how he perceives me with his public voice. Yes there is a LOT of practical joking in the Fripp household but it isn’t one sided.

Oh woe is little me. The times I come back from buying our lunch to have him leap out of a room or corridor to scare me… so no wonder I hide in the dark of his shower in the morning waiting for him to sleepily step inside, put the light on and find me there smiling at him inanely.

These episodes get so competitive, so heated we occasionally have to call a truce to gather out wit and sanity…….then a friend comes to stay……and that’s when the Fripps become a team…. working together to jump out at innocent and unwitting acquaintances…. FABULOUS.

6 years ago I had a conversation with Michel Faber about his book UNDER THE SKIN, for me one of the most powerful modern literary works in the world. Film 4 held the film rights and I mentioned my ambition to play the lead protagonist Isserley. At this time Faber believed Isserley would be created through computer generated imagery which kind of made sense as she is an alien with dog-like appearance who tries to disguise herself as human. 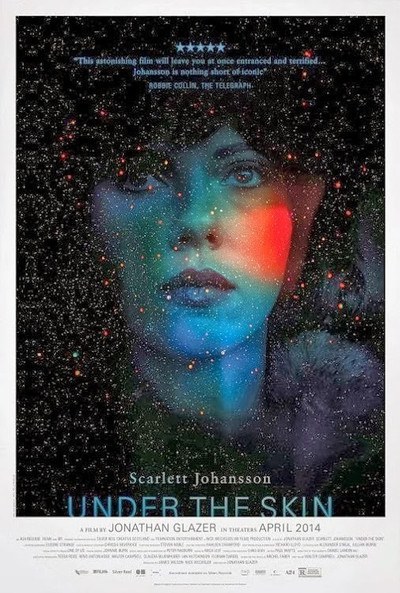 Last week I managed to see the finished film starring Scarlett Johansson. Even though I found the film utterly brilliant, Scarlett included, along with her innocent co-stars, this film doesn’t capture the stark genius of Faber’s writing. The film is a very separate entity, which instead, for me, captures the brilliance, warmth, vulnerability of Glaswegian men! Most of whom were filmed secretly according to the press.

This month has allowed me to read my first book in almost a year. Reading is a necessity for me; my brain turns to flab without it. As proven when I took part in Celebrity Pointless last month where I shamefully answer the first question with such inaccurate stupidity I came away determined to find time to read.

I can always tell when I am talking to someone who reads books and someone who doesn’t. Book readers have a different relationship to speech and language, it’s nothing to do with intelligence even though books obviously tune the reader into a different world thus freeing their imagination, it has more to do with how a book reader thinks before they talk, the pacing, the considering, the awareness of consequence……they are different to say a teenager who interacts with the world of gaming. When I stop reading books my speech speeds up and I open my mouth without thinking basic common sense through!

For Valentines Day Hubby gave me Detmar Blow’s account of his marriage to Isabella Blow, stylist for Tatler and Vogue, called BLOW BY BLOW.

I don’t think I ever met Isabella but all my friends knew her well, so I often heard about her extraordinary behaviour at parties, she was prone to boob flashing and I heard about her legendary expenditure on photo shoots. My friend and neighbour is the head of Conde Nast in the UK and he often received quite incredible credit card bills after one of Isabella’s shoots, but that said everyone I know loved her and valued her.

On the 4th June I am giving a talk with my best friend Helen David of ENGLISH ECCENTRICS for SOHO CREATE FESTIVAL and Helen was very close to Isabella.

I always imagined this exotic bird of paradise would have been the happiest soul in the world, effortlessly gliding from one adventure to another but reading her story filled me with horror. She appeared to inhabit a cruel, uncaring world which sent her off kilter, a world where incredibly successful people used her and turned their backs on her. The one beacon of light who stuck with her through thick and thin was Bryan ferry, and for that fact his first wife Lucy Ferry too.

On reading the book I was shocked that our paths appeared to cross repeatedly and unnoticed for about 25 years. We knew exactly the same people, we lived in the same areas and privately, but to a much MUCH lesser extent, I experienced her same frustrations within my creative world.

When I sat down to start reading the book I couldn’t put it down. I read it from beginning to end with out a gap. Once finished I called Robert, who was in Mexico and listed all the synchronicities. The question being “how on earth did we never meet this person?” We lived streets away in London, socialised with the same people and knew the same people out of London too!

Isabella attempted suicide several times in different locations, once near Chiswick and Ealing, by jumping off an elevation and surviving, another time in her car on the A417 and finally by drinking weed killer at her home near Gloucester. Every location was within reach of one of my homes. Reading the book made me wish I could have sat down and talked to her about the plain fact that anyone who lives in the world of showbusiness and fashion has had their boundaries severely tested and there is no greater sign of success than riding above the “shit storm” no matter how mad, crazy, bewildered and cast adrift it can make you feel.

On the phone to Robert in Mexico I thanked him for being my guiding light when things got to tough and he reminded me that I have been his guiding light through his shit storms too. Life is much saner now we are older and that’s how I like it!

The shows so far this year have been great. Fabulous audiences and the band are playing at their best, we are all enjoying the new material, it is naughty, rocky and fun!

My suitcase is packed and I am about to leave for San Francisco where I am supposed to see my sister arrive on one her legs for the ROUND THE WORLD CLIPPER RACE, but her boat has been held up by 5 days because of weather and crew injury, so I will miss her!

I know she will need a huge amount of chocolate to keep her going, there is another 4 months before she finishes back in London, so I will leave a package of chocolate and hair conditioner for her as I have to be in Seattle to promote THE HUMANS: STRANGE TALES by the 9th April!!!!!

MORE SOON!
BE PROUD, BE LOUD, BE HEARD
LOVE TOYAH