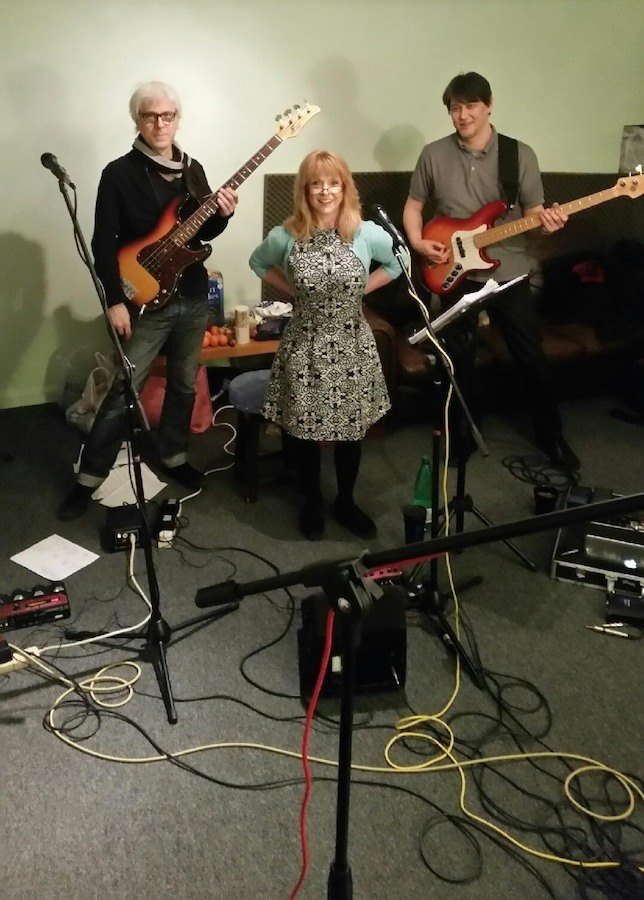 RIGHT I AM BACK WITH THE WORLD, HAVING REACHED THE LAST PAGE OF GONE GIRL……WELL I NEVER EXPECTED THAT TO GRIP MY ATTENTION LIKE A VICE FOR THE WEEK, WHAT A STORY!

THE HUMANS are now in rehearsals and we are all excited. When we get together we just smile continuously and talk about future plans and dreams.

I think it is safe to say we all love this band so much we cant wait for each new project, which might be because we don’t spend all year touring together, an event that seems to rip the seams of passion from any group of people who spend too long in each others company….in confined spaces such as dressing rooms, tour buses and uni-sex shower cubicles….joke.

Fortunately or unfortunately we have other very successful areas of our lives keeping us apart for now but here we are this month rocking!

We are going to perform all of STRANGE TALES. Very exciting! It is a beautiful album and takes such a crazy journey in sound. It will be intermixed with HUMANS 1 and SUGAR RUSH making the whole set PERFECT!

The set is dark, almost hilarious and wonderfully delirious.

My brother-in-law, is the head professor of Bedford Medical University. He specialises in child epilepsy, a world renowned expert on brain function. He has a passion for classical music. He told Bill that when he heard the first track on HUMANS1 he thought “this is an acquired taste”, then he heard the rest of the album and thought “I’ve acquired the taste.”

This is exactly what we are aiming for, a journey into a different perception of the things you thought you knew so well but then you realise nothing is fixed, the predictable doesn’t exist, it’s a trick the mind plays to try and keep you calm.

In February I changed acting agents, after 20 years with my wonderful agent, who I adored. I felt it was time to shake things up and my feet haven’t touched the ground since….it has been crazy.

I’ve found my world has opened up to a new younger work force, having stripped away older traditional conventions like waiting to be asked to go to auditions I am now self-taping and reaching more people thus more is happening and I am loving it. It does mean, though,  I am never “off” call but I am just about coping ….so far.

I had a fabulous day on EXTREMIS, a British feature film, a psychological thriller (not a horror film but a psychological story). It involved an emotionally complex scene where my character did all the talking plus a rather strange physical situation which I am not going to give away, as it is fabulous….right up my street! It took eight hours in a freezing cold disused hospital to shoot 21 camera set ups for just one scene…..I loved it! The leading man is David O’ Hara. He was great, the poor guy had to listen to me all day as we ran the scene over and over encouraged by a very excited director/write Steve Stone and many producers huddled around the viewing monitors,  all thrilled at what was happening….a very special day indeed.

Easter actually feels like a holiday. It isn’t that I am on holiday…but everyone else who usually wants my attention is on holiday thus the pressure is off for four days.

About 6 months ago I decided never to answer my mobile phone again. Yes, this is true. Because the only people who phoned me where either hypochondriacs with a newly invented disease du jour or people who just wanted me to do their job for them, life has improved 100% since I turned the ringer off.

BUT karma is at my door, grabbing my attention in other ways. WILLYFRED will always take a turn for the worse as I am about to pack my bags for a short tour, the car will break down, a pipe will burst in the ceiling above my head….there is always something that will grab that carpet your think you have a safe footing on and give it a tug as you step out of the door.

SO Easter feels like a holiday because everyone else has turned his or her phones off. JOY.

That just leaves me to feed the boys….FRIPP and RIEFLIN……do RIEFLIN’S laundry…(no complaints about RIEFLIN living with us, he has managed to re-string my Strat, some thing nether Robert nor I could do) ..get bunny to the vet….pick up the post from the sorting office cause the post man cant get it through the letter box……..change the tyres on the car….get the brakes renewed……pay umpteen insurance bills……….and deal with those who cant get to me by phone/ facebook/ post or text  who are now scripting their disgruntles by e-mail………….E-MAIL IS THE NEXT THING TO GO!

When I have days at home, no immediate gigs, no immediate TV or film projects I love the interaction and constant drive from my agents and press people, it is very motivating and always exciting but there is no “stop” button for the times like now, as we start THE HUMANS rehearsals when the outside world isn’t welcome because all the band want to do is submerge in the rehearsal process.

So this week we all leave our familiar surroundings and dive into the subterranean world of the rehearsal room. The good news being the hours will dissolve very quickly as there is so much to do and the first show will arrive on our doorstep very quickly…..like lightning.

We are all excited. We have a new band member Jake Willson. I do believe he is 29 years old……only 29yrs younger than me…….this is so cruel, I feel like I’m 12 years old, not 56……yikes. BUT at least it wont just be me who will feel ancient in his presence ….we all will.

I hope you can make it to the gigs. The band is very different to when we last toured the UK. It is all very exciting. Don’t forget you can get the STRANGE TALES album CD hard copy at the gigs too.

See you out there!

BE PROUD, BE LOUD, BE HEARD.
LOVE TOYAH XXXXXXXXXXX