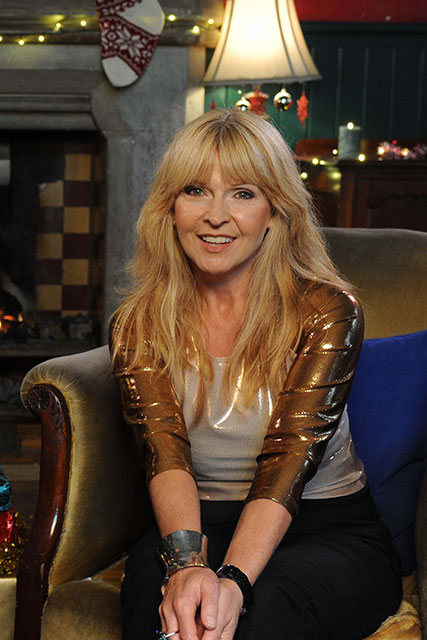 WOW! 2013 has been one hell of a year, utterly life changing, utterly fantastic! It’s been really great finishing the tour in London, with a stunning show and a wonderful crowd at the O2 Islington.

With the success of this tour behind me and the success of the spring tour of HORMONAL HOUSWIVES I feel 2013 has been a great year, but even greater because I have learned so much in the process.

Life is about living your dreams, standing strong in the belief you deserve to  achieve your dreams and not giving in to obstacles no matter your age………LIFE IS FOR LIVING AND IT IS NEVER TOO LATE TO START.

2014 looks crazy already. We have some really lovely shows coming up.
The TOYAH band are out in force as of February…….and I have a TV show to do before we hit the road.

In 2014 I am touring two shows….TOYAH THE BAND doing CRIMSON QUEEN/GREATEST HITS and TOYAH ACOUSTIC! The band show is loud and rocking and the acoustic show will be more dancey, personal, full of stories and images as I will be using a cinema screen.

Currently I am in Seattle with my writing partner Bill Rieflin, we have some planning to do for the west coast tour of THE HUMANS in April.

Having started December with a head cold, caught off my husband who in turn caught it off a member of KING CRIMSON at a rehearsal……really there is no excuse, a cold is a bloody inconvenience whoever gave it to you.  But I don’t care because I am in one of my favourite cities in the world Seattle to celebrate an early Christmas with Bill Rieflin and his wife Frankie.

All sorts of adventures are planned. I have never been in America at Christmas so I am EXCITED!

My stay won’t be too long as I have to get back for work, in fact as soon as I land back in blighty I have rehearsals for a new show……immediately as I step off the plane!

THE HUMANS American tour dates are set, Bill and I need to just finalise a few things. It isn’t a huge tour as there will be so many of us, is in fact a circus of buddies hitting the road in April 2014. On the stage will be Wongoose, Bill, myself……..then Robert Fripp, Peter Buck plus some others to be announced……there is one name being mentioned…..let’s put it this way…if Bill pull’s this off……we will be making history……I’d say don’t hold your breath…….but I’d also say…..STRANGER THINGS HAVE HAPPENED.

We will of course be playing HUMANS 3 in its entirety. The USA is a long way to go to see us, so please do not fret as we intend to head to the UK in 2014.

Already I am dealing with scripts for shoots in 2014. One is the female lead in a British film, which I have agreed to do as it puts me right out of the area people perceive me as belonging to. It is a period drama and one of the best scripts I have ever read……..but I have promised the producer I will say no more!

The other film I have said yes to is a Sci-Fi, which will shoot in the summer.

My highlights in November where playing Southampton, The Brooke…… it was so brilliant a show my hair stood on end from beginning to end, I’d say one of the best shows of my life. Playing the O2 Islington is always a highlight. Do you know it is virtually impossible to play London these days, the venues are tough for new acts to get into but I am lucky, I have a great audience and I get the venue! We are all looking forward to the Jazz Café on the 29th March next year!

Another highlight was interviewing Gabrielle for VINTAGE TV LIVE SESSIONS. WOW what a fantastic lady. Gabrielle sang two songs live and then we talked. She was so warm and welcoming, very interesting and passionate about her work. What we had in common is we are lyricists rather than musicians so we really put our heads together and TALKED AND TALKED about that subject!

And lastly the VICTORIA AND ALBERT MUSEUM TALK was a privilege to be part of. I was treated with respect and care, which kind of surprised me, but I was there being valued as someone who contributed and changed fashion in the 80s, who led the way for the likes of brilliant artists like GaGa and many more……..thank you.

So my friends I wish you a…….
HAPPY CHRISTMAS AND A HAPPY NEW YEAR FROM THE USA!
But I will be home for Christmas with my hubby!

PS check back to the site later in December for plenty more surprises and live tracks as part of the TOYAH DIGITAL ADVENT CALENDAR.