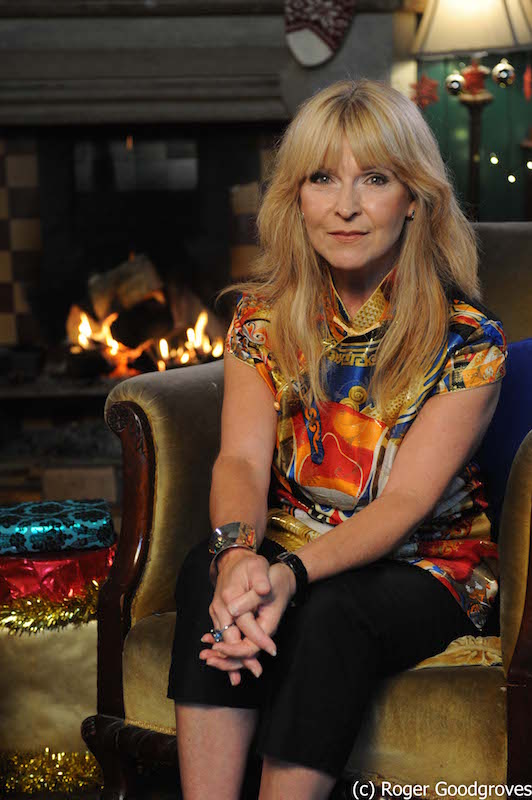 Am I ready for Christmas? In regards to socialising and entering the festive spirit …. ABSOLUTELY!

But in regards to actually being set with all the Christmas shopping done, the Christmas cards sent and the store cupboards stocked….NOT A CHANCE IN HELL! Already I am doing press for 2015. The diary is full for the next twelve months. I’ve kind of leapfrogged Christmas so far and my head is fully in The Humans tour 2015 and the new album.

I will be forced into the Christmas spirit once everyone else goes away on their holidays. My Christmas will be a frugal one this year as I’m the guarantor for The Humans tour and the album, both very costly processes. Anyway Christmas isn’t about the spending. It’s about seeing friends I haven’t had a chance to see for months on end. Christmas is good company, good food and friendship. That said I like to spoil my husband rotten.

I managed to get over to France in November for the first time in 14 months and I found a tiny wooden trinket box in thrift shop that was dated between 1799 & 1800, the end of the French Revolution and the beginning of the Napoleonic wars. The French have no interest in stuff like this, so it’s relatively easy to find. My hubby will love it.  That’s the best part of crimble the joy of finding him gifts he’d never have expected.

So if my head is buried in 2015 already, what do I intend to do for Christmas itself?
Well Christmas Day for us is no different to any one elses……..we eat and eat and eat. My favourite treat being to sit in bed Christmas morning with Robert surrounded by our wrapped pressies and as he opens them I eat a packet of liquorice allsorts and a packet of marshmallows! That for me is my Christmas……. HEAVEN.  Even though Robert guzzles them while my back is turned and starts opening my presents when his are all opened…..WAR!

I am doing something Christmas week I’d never expected to hear myself say……I’m taking Robert to the panto in Birmingham! He can’t wait. Really my husband is a super cool dude until you put him in a panto audience and all of a sudden he wants a “light up” fairy wand and flashing reindeer ears……. he is such a kid at heart.  For the past two weeks all he is talking about is going to the panto!

Obviously (as you will probably know or realise by now) I am not appearing in a pantomime this year. In fact I am not sure I ever will again AND though I believe in saying NEVER SAY NEVER, I think I want my Decembers to be with my hubby who isn’t getting any younger and who I want to enjoy the festive season with…….oh and by the way I am not getting any younger either!

Our Christmas lunch is always a feast. We allow ourselves no boundaries when eating and as both of us are pudding addicts we will eat at least two to three different types of desserts. Living on a busy high street a lot of our friends are traders and they are mostly exhausted come Christmas Day, so the ones who have no family and intend to spend the day alone watching DVDs come to us for lunch……..for three hours then we send them home completely rat arsed!

What are my hopes over Christmas? Above all the safety and happiness of all those in my life and all those around me. I am still in complete shock over the car prang I had in October, where the event happened so quickly. It has completely re-set my mind about driving and how safe we are in our cars and the effect we can have on other people.

I have no regrets about my past but if I could take any split second back and re-set events the car prang would be the only one I’d wish to re-write out of happening.

Other hopes for Christmas? Peace in all its meanings from peace of mind, to silent peace. Where has silence gone? As for the more common meaning of peace I’m starting to believe in my lifetime it might never be seen. We seem to be entering a future similar to Bladerunner where the machine, the logo and the news stations rule the world……..where has the simplicity of just “being” gone? Oh for the silent joy of just watching a river flow by……without hearing “candy crush” being played on the next river bank.

The concerts have allowed me to travel the UK and parts of the USA meeting fans new and old and also sharpening my performance skills. It has been a growing year and 2015 promises to be the same with more shows, more demands and more music…I wonder if there will be more acting?

At the beginning of November I managed to get to my home in France having only spent three nights there since buying it in September 2013.  This had been planned for almost a year. Having never holidayed alone with my sister it was quite an experience. Very quickly I realised she is more hyper than me!

Neither of us sleeps well, so we’d both surface by 4am. I usually do all my office and creative work in these early hours but my sister likes to walk, and walk, and walk and walk.  I swear I wore a pair of trainers out. One day we walked to Monte Carlo AND walked to Italy. (I live in the middle of both in Menton).

This was exhilarating and challenging as I am still building my strength up from the virus two years ago, but I did it. My sister is a tough person. When my parents were alive and my sister was still in nursing her nickname was “Butcher Willcox”, a name one could use back then without connotations of murder. She is resilient and takes no shit. Her last job was to man the NHS TERRORIST RESPONSE TEAM for the London 2012 Olympics. My sister can be terribly bossy, even when there is a language barrier.

I took her to see Monaco, purely because the place is an absolute horror, the pigs arse of the monied. It is a hell money has constructed and it just has to be seen.  In Menton the French are wonderful, family orientated, welcoming people but once in Monaco it is ‘dog eat dog’ and this somewhat shocked my sister even though she has tackled terrorism face on, the arrogance of Monaco caught her off guard………everyone in Monaco is arrogant even those selling sandwiches and I had to get my sister out of the place when she started shouting at the locals for not understand English……..because they choose not to!

It was a great experience. Having lost a year of my sister’s life to her sailing around the world, it was a chance for us to be sisters again. I came away having learned I am the quiet one in this family!

Thank you to everyone for making 2014 so special. Thank you for your support with the shows, it was great to play for you all.

HAPPY CHRISTMAS
BE PROUD, BE LOUD, BE HEARD
LOTS OF LOVE, TOYAH