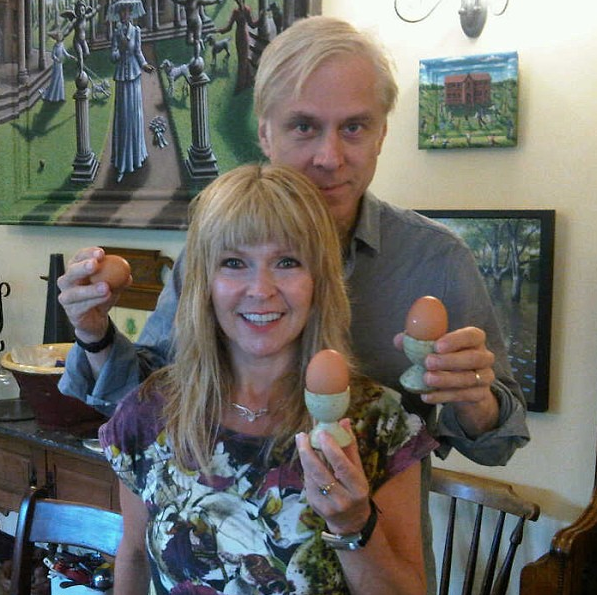 All last week Bill Rieflin (THE HUMANS) rested up at our home before playing at Glastonbury with Peter Buck and Robyn Hitchcock. We spoiled him rotten! Firstly we took him for high tea at Buckland Manor in the Cotswolds.

Mr. skinny Rieflin tucked into clotted cream and scones, then we took him home, after a walk around the Cotswold town of Broadway where he tried on tweed jackets, and we fed him again! Then the following day we took him to The Bridge at Bidford for lunch followed by tea in Stratford, followed by supper.

Secretly, in the case of Bill Rieflin, I am a feeder. The joy I experience if he leaves our home after a few days with a muffin top peeping over his baggy trousers is immeasurable. He will not be too pleased with me for telling you all that but he is now en-route to Norway ……so tough ☺.

We had good HUMANS future proofing time and got a video idea underway and also the possibility of a live internet performance was explored, plus management because I am toooooo busy to manage this unruly band, it is like trying to herd cats………☺

One morning Bill returned to our house after popping to the shops and was thrilled that our local Asda plays Robbie Williams “Candy” in rotation. Bill played drums on the album. Robert and I explained we always stop our shopping to dance in the ailes when it comes on.

My training is going well and I am getting stronger all the time. It will take all year to regain my full strength but I am moving in the right direction. I’m a little addicted to the ALTER G running machine, it gives you 30per cent gravity, the same as walking on the moon, which allows me to run with out hurting myself. Believe it or not running is something I am not allowed to do unless I am on this machine.

The only problem is I am too small for the machines design. A rubber seal has to be fitted around your waist, this is then zipped into an air suit that surrounds the running platform, then air is pumped into the suit and it lifts you to 30per cent gravity. Because I am small the rubber seal isn’t tight enough and the air escapes from around my waist making farting noises for 30 minutes, rather like air escaping from a balloon. I just turn to the other trainers and say “excuse me its my age.”

The Guardian have just been on the phone wanting to talk about the V&A CLUB TO CATWALK exhibition which opens on the10th July. I’m only featured in a photograph, this is the THUNDER IN THE MOUNTAINS single cover. But the Guardian have been sent pics of me in a Melissa Caplin outfit I donated to the Sheffield Rock Museum in 1987, how they got hold of that shot I do not know because I only wore this particular outfit once. It is a bright orange highway-mans coat with black abstracts painted on it………..very day-glo.

I really have managed to cross the boundaries of quite a few music movements………punk, new wave, new romantic and gothic. The Guardian asked why everything was so inventive back then and my reply was “it was before the time of the consultancy firms, focus groups and PR companies predicting future colour schemes, fashion and trends 2 years ahead of the time. Everything was real back then.”

I’ve agreed to be involved with a talk about 80’s fashion on the 8th November at the V&A, the night before we play ISLINGTON O2.  They have asked I bring my collection of stage costumes along form this period. I have to say I will be so proud to see them in the middle of the V&A!

Presently I am reading PROOF OF HEAVEN by DR. EBEN ALEXANDER. It is a best seller in New York and my hair dresser Mark recommended it to me, having lost his father not too long ago this book has given him great comfort. For me I have no doubt my mother is still by my side, my father I cannot feel, he has truly flown away, but mum is communicative, mischievous and constantly present. Its funny death dosen’t scare me but others deaths do. What I mean by this I am scared of loosing my friends, my husband, any more family, YET, I believe in eternity.

So I am reading this book to see if it helps me deal with the loss of friends. And low and behold in chapter 9 the author describes something I experienced when I was 14yrs old. In the exact detail I have described my experience in my autobiography LIVING OUT LOUD when I used to dream of a TALL WHITE (http://www.youtube.com/watch?v=7gLQ8Z6vlUY) taking me by the hand and out into the universe to meet the “sphere beings”………it’s a fascinating read………….

Going back to Bill, he was with us when our garden was vandalised. At 10pm there was a loud knock at our front door and three police people came in saying “ we believe Toyah Willcox might be the target of intruders.” Boy! This was freaky. So they all run out into the garden to discover the mess the intruders had left behind. Out statue RITES OF SPRING made by the sculptress Althea Wynne was smashed as were stone benches. The real sadness of this damage is Althea was killed last year when a truck drove into her car. We can never replace the sculpture, the memory nor the presence of Althea, and that is heartbreaking.

The police were fantastic, so where our neighbours who reported it. The culprits where caught and admitted to the damage. They are in their late teens. That night they were so drunk one threw up in the police car.

I would just like to point out that on Saturday at Glastonbury….quote  “2.54 million tuned into see the Rolling stones and 2.78 million watched Die Hard on BBC1”.  When I played Drury Lane, live on BBC2 Christmas Eve 1981,……..I had 12 million viewers. Just an historical fact. ☺  but who cares I am just a female ☹