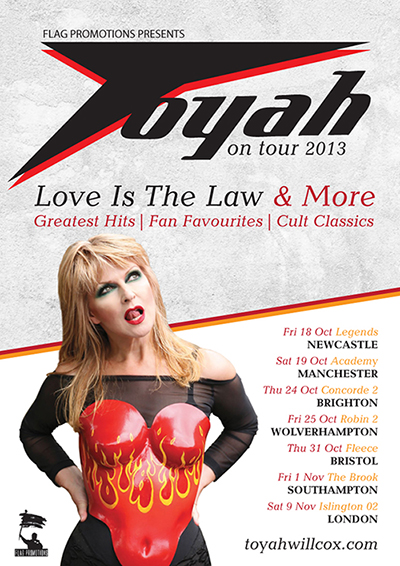 Here I am learning the lyrics to SENSATIONAL, which is going into the new TOYAH set this year. AND can I remember them?!!!!!!!

I wrote them but they wont go into my head. Having just learned 216 pages of dialogue for Hormonal Housewives, effortlessly, why are song lyrics so notoriously difficult to learn? But I will persevere; firstly I have to and secondly after two weeks solidly addressing this, the damned things have got to stick somewhere to the walls of my head.

Life swings like a pendulum between glorious creativity and absurd normality.

This morning at 8am I dragged my husband kicking and screaming to the doctors and made my husband have every ‘ill’ he constantly complains about looked at by a professional rather than me. For the past four years I have had to guess diagnose his ill’s from trawling through the reams of self diagnosis on the internet. Now I’ve had enough!

Why are men so bad at going to the doctors? Why do men think their partners, spouses and friends are better at diagnosing than a professional? The doctor completely ignored me as I listed all Roberts many neglected ailments. I guess his wife has the same trouble with him, but I kept on listing them until he realized I was determined the NHS was going to treat my hubby and not me. As we came away I felt like the mean schoolteacher having made the naughty pupil eat lumpy blancmange.

Now I am free of the touring schedule of Hormonal Housewives I am back in the flow of TOYAH LIFE.

Firstly I am back to full health, which is a huge relief, I must never get to a serious point of exhaustion again. That said I start training in Cambridge this week, along side a few Olympians at a center that specializes in ALTER G rehabilitation ……anti-gravity training. There will be a lot pictures twittered once I am in my full blow up suit on the treadmill!

Now time is mine again there’s the odd million meetings with TV, film, stage and record companies. VINTAGE TV are making an hour special with Robert and myself, as well as a series I have proposed about women in music, plus TOYAH’S CHRISTMAS and there will be some live music filming of the TOYAH BAND all happening in the next three months, before the autumn tour kicks off.

The autumn tour will be fun, because it will pull together a real journey in my life, from SHEEP FARMING to LOVE IS THE LAW to IN THE COURT OF THE CRIMSON QUEEN. Make the most of seeing this tour because it will be the last one where we feature an album for a while, in chronological order of release.

There’s a lot of new stuff going on and CRIMSON QUEEN for me would be far more fun to put live than MINX, that said I am going to talk to SIMON DARLOW about doing some live shows of the songs we have written together, believe me the new stuff we have done already is really kicking, so undoubtedly MINX stuff will slot in somewhere.

The last four months have been an incredible journey for me. I have come out of it stronger and I hope a whole lot wiser. There have been some very funny synchronicities along the way.

In March, after the show in Folkestone, I needed a physio on a Sunday in London. Googling for a physio who worked on Sunday I found Cherie who worked at a gym around the corner from me. She had a free appointment. Cherie was great, in fact I now see her regularly. But…..this is a first of many synchronicities ……….she is from Seattle. She went out with Robert’s drummer in King Crimson 20 years ago when she was a teenager. Her husband is a renowned music producer and she knows all Bill Rieflin’s friends. At this time my knees where being problematic (nothing serious) but thanks to the viral infection I was getting over, my knees where painful and she recommended I see a surgeon in the future who is specializing in a new technique…….. she handed me his name, it is the little brother of my lifetime friends from school, Bina and Gita. I had no idea he had become one of the UK’s leading pioneers in knee surgery, as I hadn’t seen him for 40 years.

Then a short time later I was walking towards my car in the West End and someone was calling my name, so I stopped and said hello, not knowing who they were and it was Bina and Gita’s younger sister Sheila, who again I hadn’t seen for 40 years and people can really change in 40 years, so I was forgiven for not knowing her immediately.

I love it when time and the universe makes connections on your behalf, which I believe it does. So this month I am seeing as many of my friends as possible, because for the past nine months I have been too busy to have a social life and I miss all my friends.

On talking to Craig Astley about how weird and sad the general home and international news has been recently we wanted to post a link to a song I wrote with SIMON DARLOW five years ago HEAL OURSELVES as we both feel it has never been more relevant.

See you all soon, hopefully, either at one of the summer festivals but certainly for the LOVE IS THE LAW AUTUMN TOUR.

All of the tour dates are on my GIGS page and there’s a new live track of the month there too.