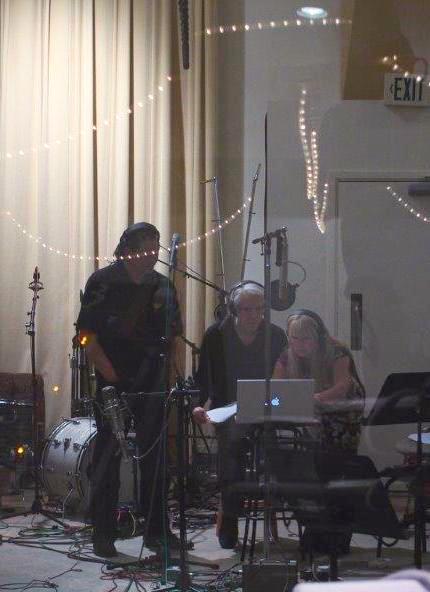 It is thrilling to see the response to HUMANS 3. Thank you everyone who has downloaded the “STRANGE TALES” album which entered Amazon’s Rock Chart at 26 today!

The artwork is an actual photo not a constructed artwork. The photographer, Konrad Puddick, was taking pictures of moths when he realised he had an otherworldly “orb” in one of the developed shots. Andy Doble of the TOYAH band sent me the picture saying, “Can you believe this orb!” I fell in love with it because Andy sent the picture as a close up of the orb, the scale of the moth and it’s antennae against the orb are like an insect invasion, that and the added fact insects where here long before us, the humans, makes it perfect for our artwork. There is a digital album booklet for STRANGE TALES now available from my discography.

Bill and I came up with the title over lunch in Seattle last December. We were in a typical American diner and I was explaining how I liked to get up at the crack of dawn and watch the sun rise over Puget Sound and see all the boats come to life and the night people disappear and the market stall holders take over…. so many strange tales. Bill liked this immediately. This is a rare happening. Bill is very hard to please.

In the studio, whilst recording, there was a piece of paper on the wall for album title suggestions. This filled up very quickly with unprintable and very likable titles. My favourites being “Bill’s face was made for sitting on”, this had the piece of paper torn up and started again to which I added our all time favourite, and I must state here because of my physical history it was accepted I had the experience to suggest this……… “Cripple Disco”, (this came from my history of having to learn to walk again) a title suggestion that had all press people, management and potential record companies screaming NO! NO! NO!

For the entire period in the recording studio this piece of paper filled with obscenities mainly aimed at Bill which he ignored until friends visited and as their eyes naturally moved towards the piece of paper on the wall titled SUGGESTED ALBUM TITLES Bill would dive head first to rip the page from the wall in case gems like…I LIVE IN BILLS UNDERPANTS, BILL: A PRIME REASON TO JUSTIFY CANNABILISM, BILL HALF MAN HALF MELON where spotted by his very credible list of high profile friends.

Great people made this album possible for us, Pearl Jam made the studio available to us and Death Cab For Cutie loaned us their equipment…THANK YOU GUYS!

STRANGE TALES is very close to my heart. It sees a first…I play brushes on Get In Your Car And Drive! Everyone who has heard it says it’s the best work I have ever done musically and as a vocalist.

Apart from the happy memories of writing and recording in Seattle there was a discipline applied to creating this album that I have never experienced in past recording. Because we recorded onto two-inch tape and transferred to digital there was a lot of mathematics involved in how many tracks where available, how to wire up all the equipment and how to place the stereo. There were many occasions when silence fell and we all had to put our heads together and just map out the track listing. On IMPROBABLE THING there are about 20 vocal tracks on the chorus.

Bill Rieflin produces with a fist of iron, he wont let anything slip by the by. If he doesn’t like a lyric then I am sent away to re-write or we address it as a team. Sometimes he realises the original is the best and we return to my original idea, sometimes a completely new approach to a song is born. It is satisfying to be pushed, pulled and pummelled this way; it caused new directions to emerge.

I cannot wait to perform it live!

The TOYAH shows have already started in the UK. TOYAH ACOUSTIC kicked off in Buxton and was a success.

I love performing TOYAH songs acoustically. They sound fresh and contemporary. The lyrics had more meaning and clarity in the sonic space of the two acoustic guitars. In Lytham we had two promoters in who said the songs where excellent and had completely changed their view of me as a songwriter. We had a great offer to be put on quite an amazing bill of artists later in the year.

Many more of these shows are being added into the autumn schedule. It was fun to do and easy on the ear…no drums thundering around my head! It also means Chris Wong sings…Chris hates singing…. so the more he sings the better tee hee. This doesn’t mean less TOYAH shows with the rock band, in fact more of those are going in too. The TOYAH AUTUMN TOUR DATES will be announced later this month. The dates are in and they are good places, big cities!

It was quite a leap going from acoustic Toyah into Electric Toyah. Holmfirth was a wonderful venue, rammed to the rafters. We had a slight emergency with Tim Rose not being available but Mick Nichols stepped in and was fantastic, this meant we had to slightly alter the set list but the show went on and every song was a TOYAH classic. It rocked!  Nuneaton too was incredible, what a wonderful audience. Rammed to the rafters again. Now our bassist emergency is over we will be adding CRIMSON QUEEN songs by Bury St. Edmunds when we have Tim Rose back.

I have a lot of learning to do in March. There’s the HUMANS set to learn and “AAAAHHHHHHH” the film script to learn as we start rehearsals on the 16th March.

This film requires a different technique of acting style. Slightly heightened emotion and accessing hysteria for brief sudden bursts because we are all gibbering like apes rather than speaking English. Also all the characters are very normal but prone to sudden violence……….it’s capturing the normality that will be the challenge!

Last night I was a guest of David Bintley at the Birmingham Royal Ballet. I went to see The Prince of the Pagodas where one of the characters was a salamander. The characterization was stunning and gave me a lot of ideas for sudden mood changes in “aaahhhhhhh!”

My husband was away for Valentine’s Day this year so I took the King Crimson boys, who were in the UK rehearsing, out for a hot date. This was a good trade off. No hubby but three fabulous Americans, Bill Rieflin, Tony Levin and Pat Mastoletto. We trundled off to a Japanese restaurant on Waterford High Street, Hanako. A very modest address but an incredible chef, the food was great. Bill was in heaven. Both Bill and Pat ate my food as well as their own. Our table became a battleground of munching!

Tony Levin spends most of his time touring with Peter Gabriel so the talk across the table was mainly about creativity and private jets. Bill having spent seven years on the road with REM had a lot of private jet stories. All discrete, all matter of fact………… boy how the other half live!

My only experience of a private jet was in 1983 when Sir Laurence Olivier, Greta Saatchi, Roger Rees and myself flew to the Dordoyne to film The Ebony Tower. We were served about four bottles of champagne on the flight before the stewardess told us there was no loo on board…………. when we landed all four of us ran past passport control shouting “Où sont les toilettes s’il vous plait!”

BE PROUD, BE LOUD, BE HEARD!
LOVE TOYAH