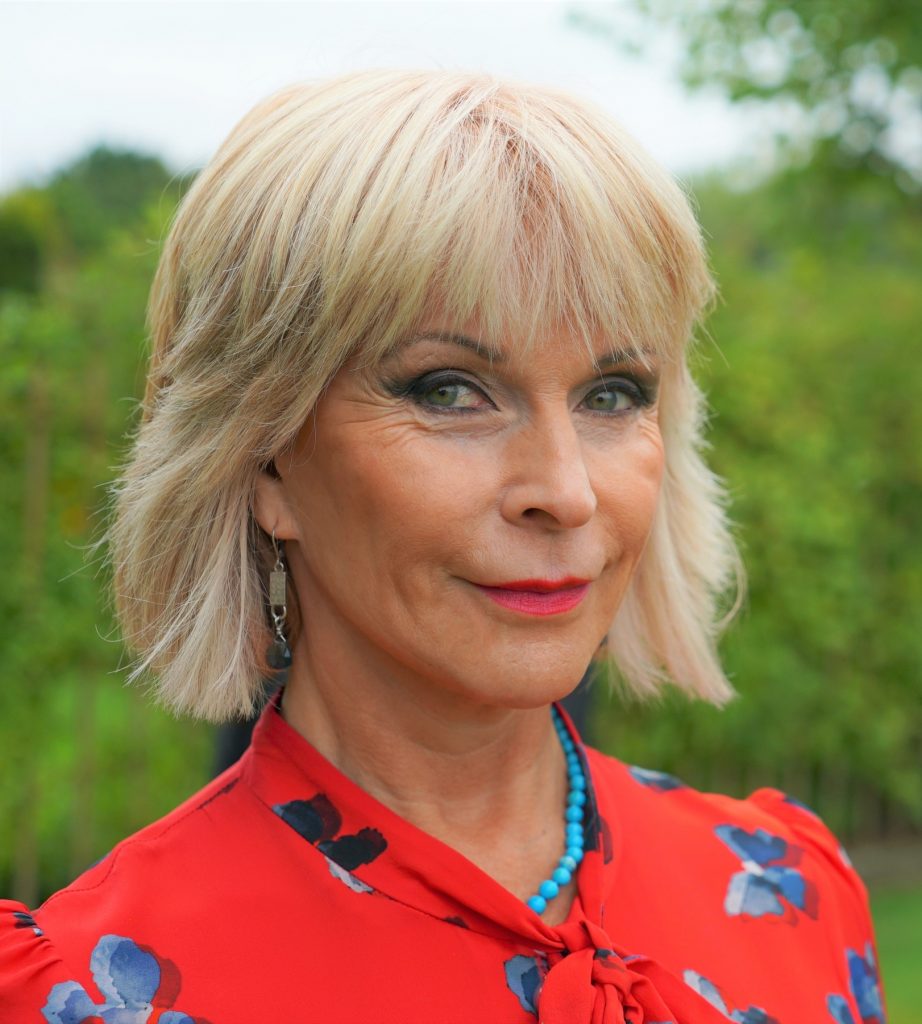 I hope you are all safe and well.

YEAH! It’s March at last, with the spring solstice only weeks away. I don’t want to miss one second of this fabulous time of year, the whole of nature starts its symphony and its new album will be ready for a summer release. The robins are getting super competitive, the pigeons are courting and blossom is already a month early.

February was a brilliant month….. bar the odd mishap.

The concerts have been phenomenal, the Posh Pop band are magical, they are so on the music, the journey of each song, growing in intensity and daring to be subtle at the same time.

OBSOLETE has become one of the audience favs in the show…..now that tells you something about the Posh Pop band….I never thought in 41 years this song of wild abandon would win such a new following.

At Whitehaven on 18 March, we add Dave the Drummer, it won’t be what you’re expecting, he is bringing a blend of percussion and synth drums based on the sound of the 1981 album Anthem.

We are also planning some moves for the festivals, moving the sound and the playing around the stage. The shows have been tremendous, five star reviews with the press voluntarily coming to review the shows.

This tour was intended as the development stage for the new band to work the new material and be ready for the festivals in May onwards, thankfully the shows are in great shape already and the reviews prove it.

The POSH POP band are growing and growing, which is my aim for the rest of my working life. What I love about this team is they want me to grow and develop.  I get feedback and a lesson in music if I ask for it.

Performance should be a fluid experience, evolving as people naturally evolve. Bands are renowned for growing together as one, as you can guess I am really excited.

The band are determined that I will play guitar on stage; this still terrifies me! There can be a lot of distraction on a stage, some times a movement in the audience can make me get a lyric wrong so imagine if I get the guitar playing wrong… cripes.

It’s been a very emotional past few weeks. I am welling up in tears about Hazel O’Connor all the time. It’s so unfair this should happen to such a driving force of a human being. I am also very emotional about war in the Ukraine. 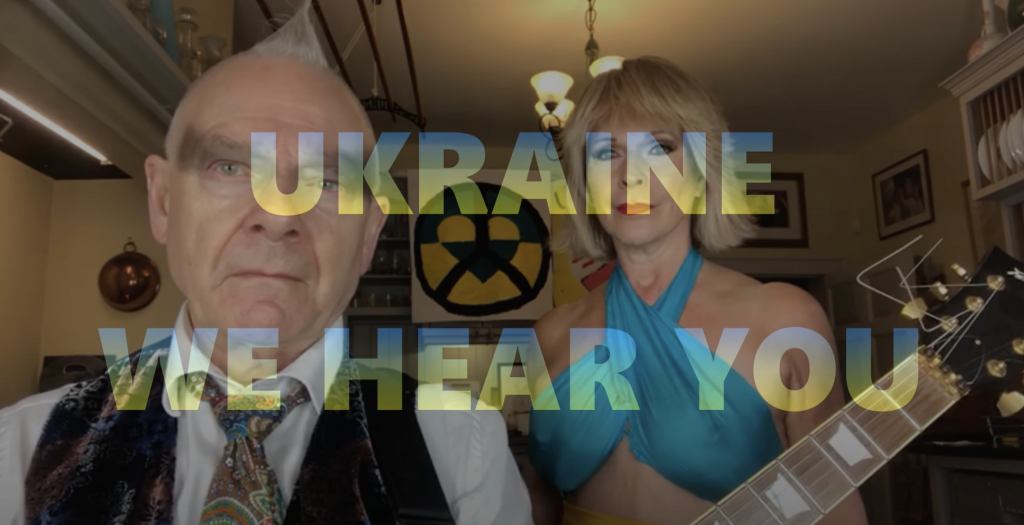 Those of you who know my very early work will know that War has featured strongly in many songs and in my imagery, the cover of Anthem is a comment on war as much as it’s a comment on female power and fantasy.

I was born to parents who fought and lived through WW2. In 1982, when making The Changeling, the Falkland’s War started. In 2003 as I entered the jungle in Australia for Celebrity Get Me Out Of Here the invasion of Iraq started and there have been many other wars during and since these times.

In 2022 it feels even more immoral to send the young to fight each other……..putting it basically “shouldn’t this be embarrassingly, unacceptably old-fashioned by now?”

I am not a leader, nor a Politician, nor a peacemaker of great rhetoric………..like the majority I feel disempowered to help. I am an ideologist wishing that 7 billion people had the mental power to crush warmongers by sheer unified visualisation and intent.

For one of the shows I had to drop Dance In The Hurricane because for the three prior shows I’d burst into tears just announcing the song and now Take Me Home has taken on yet another present day meaning with people being displaced in the Ukraine I am fighting back the tears singing the words…. TAKE ME HOME, TO OUR ROCK AMONGST THE STARS, WE ARE NOT ALONE ON OUR ROCK AMONGST THE STARS.

And the audience are with me on this, the focus in the theatre is passionate and intense, the response unified.

Whenever it gets super busy, as it is now, I seem to attract more work. Someone must have dropped out of a documentary series for Ch5 because I was mid-travel in Cumbria when a call came for me to be part of two documentaries on Brad Pitt and Julia Roberts which had to be shot the next day, requiring detailed knowledge of 36 of their films. I was up all night studying for that. 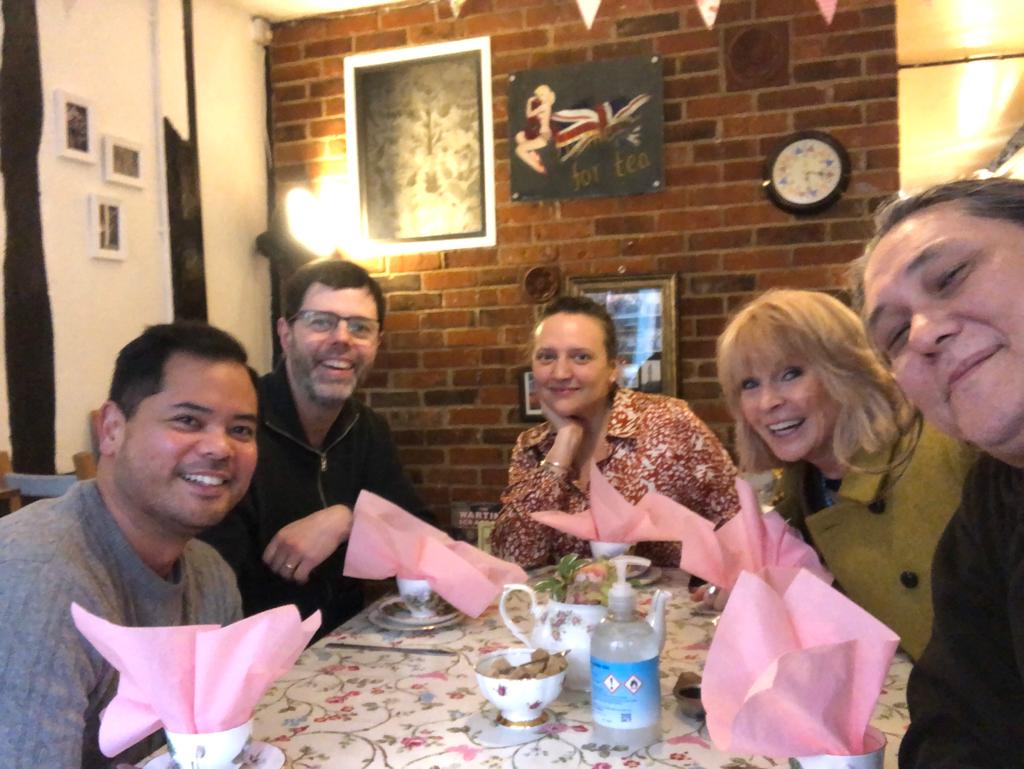 There’s other projects that have been slowly edging forward in the past 5 years and suddenly one has fallen into place and a pilot needs to be shot ASAP – again while I am on the road. This is a comedy series I was cast in just before lockdown.

I am constantly reminding agents I have been double booked, rather than panic we somehow make it work.

My life is good but I am still finding myself in situations when I am not heard or simply just not listened to or seen for what I am and I think to myself “ how did Marianne Faithful and YOKO cope with a world at their door who depicted them as some kind of monster?”. These two remarkable women had the world baying at their backs with accusation after accusation.

My story is small fry in comparison to what Marianne and Yoko had to put up with, I had a conversation arriving at one venue where the promoter had put a sliced loaf in the dressing room. I was told to eat it all because he had had it sliced….it was bizarre. I am sure no one would ever talk to Robert like that.

I feel so determined to knock down this wall of institutionalised  condescension and domestication of women Yet on the other hand I am trying constantly to be a little more feminine/softer as a person. Believe me I am grateful for the loaf of bread, I just don’t need to be force fed it. 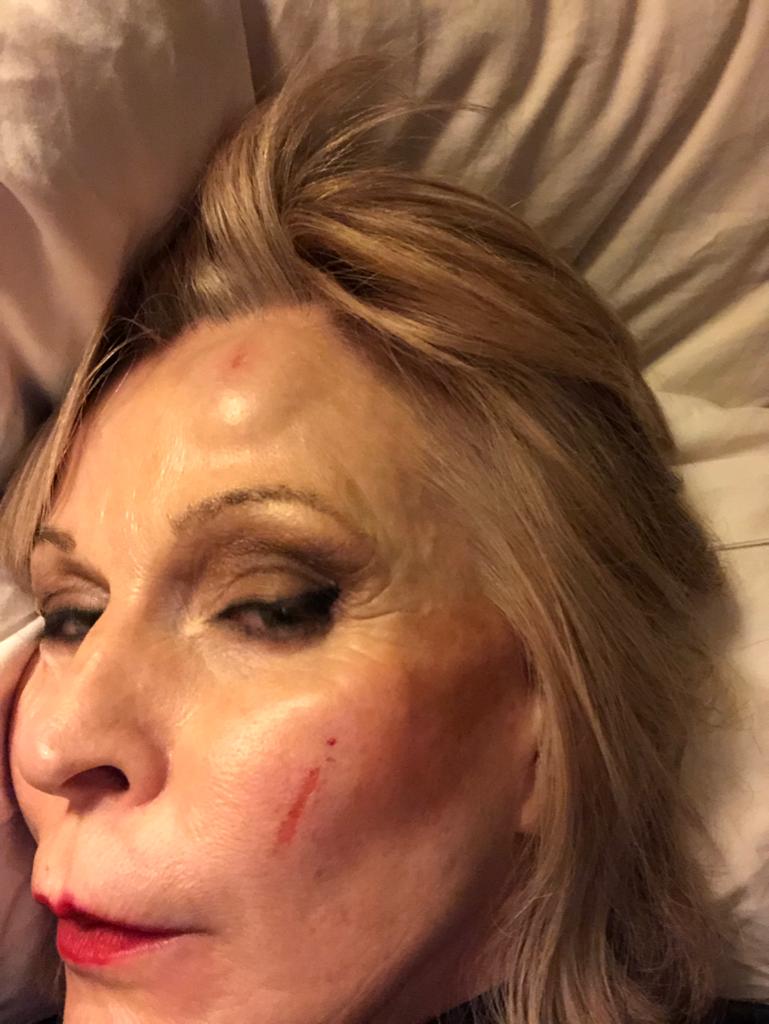 I survived a pretty bad fall leaving the show in Wales in February. It was in the dark behind the venue and a hidden concrete step took me down at speed and I face planted on a metal fence, leaving what appears to be a permanent two inch scar on my right cheek.

My resilience has been sorely tested.

Shock kept me going for the hour I needed to get home to Robert. Chris Wong tried to stop me driving off in the car, quite rightly but I was so shaken and bleeding I promised I’d go straight to an A&E, instead I made it home and collapsed, my body shaking in shock.

Looking back this is the 6th time I have fallen in three months! I fell twice on Proud Cabaret, but that was my foot getting trapped under a revolving platform.

Bill Rieflin used to freak when I fell. In America the car parks have raised concrete platforms you pull up to when you park, I’ve gone arse over tit over those on many ocassions with Bill shouting “OMG are you Ok?”.

I even managed to fall walking through Tokyo city with him. I fall a lot!

So I have to schedule in the one thing I have been avoiding for 5 years…….my eyes, it’s time for the dreaded lens replacement. I know millions have it, but I am FREAKED at the thought of my eyes being touched.  It can only be done in April otherwise it will have to be next year. OH BLOODY HELL!

Three years ago Fripp and I were in the business lounge in Nice airport. There was only the two of us and one man in the far end of the lounge. It’s a secluded corner no one knows about.

Fripp wanted to set his computer up at one of the work stations and he found a phone plugged in and charging, so Fripp being Fripp he unplugged it and put his computer on charge.

It was the end of the Cannes Film Festival, so the airport was quiet. The young man in the area with us stood and removed his phone, the one that Fripp had unplugged, it was the actor Robert Pattinson, in disguise, I berated Fripp for this and told him to keep to himself, Pattinson was obviously hiding.

Slowly the space filled with film execs talking about the deal for The Batman and congratulating Pattinson on being cast. We were actually in the middle of all this!

TOYAH TOYAH TOYAH is ready for release on 13 May and the ANTHEM re-release is well underway for the autumn. The ANTHEM 40+1 Anniversary Tour is also now on sale for Sept-Nov.

STAY SAFE EVERYONE. Hand washing is part of all our lives now and forever, because it works well.

SEE YOU OUT THERE!
BE PROUD! BE LOUD! BE HEARD!
LOVE TOYAH