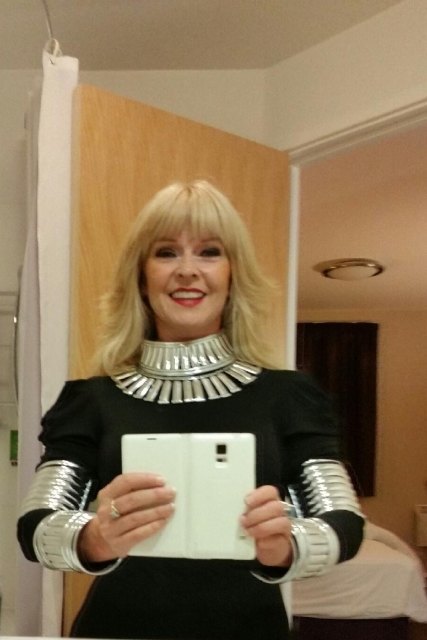 HURRAY THE TOUR STARTS THIS MONTH! WOW! WHAT A MONTH SEPTEMBER HAS BEEN.

I always knew September would be special after a call from Kate Bush’s PA in August inviting me to see BEFORE THE DAWN. Then after I was to fly to Philadelphia to meet up with the KING CRIMSON tour…….that’s a lot to look forward to.

Firstly I had three acoustic shows to complete and they were great. Norwich, Stroud and Totnes were rammed to the rafters and brilliant! My tour management phoned me (from their holiday in Gran Caneria) and said “Have you seen the reviews! Because if you haven’t you should!”

There is something about the acoustic show that is working that is beyond our planning. I think it’s because the acoustic guitars just ooze joy and the songs are heard in a different light. There are subtleties and depths that are possible to experience without drums dictating the volume.  Yet there is boundless energy coming from the three of us…….it’s lovely!

Before seeing Kate I went to see Lenny Henry’s opening night at The Birmingham Rep “Rudy’s Rare Records”. Sitting with the director Paulette Randall the nostalgia of my teenage years came back to me. This is a play about a record shop in Birmingham. I used to go into it as a teenager. The goodhearted, spirited drive and humour of my home city poured out over the audience. Lenny Henry was brilliant, his character being the most grounded, sensible one on stage gave a new perspective to the Lenny Henry we used to see on TV in the 70s. Lenny has blossomed in his maturity.

Then the next day after numerous TV meetings I get to see Kate at Hammersmith Apollo.  I knew it was going to be life changing. Having loved everything she has written but not being able to guess what I was going to see on stage.

Firstly her voice was magnificent, powerful when needed and subtle when chosen. The whole experience was perfect. It wasn’t just Kate who was spellbinding, the band where sublime, the directing, the events, the music………..it was perfect! I had tears in my eyes from the moment everyone walked on stage until the end. AND part of this exceptional experience was the attention of the audience……no one took pictures, no one filmed……everyone listened and it made the event completely different to any other.

Having been invited backstage after the show, not something that comes naturally to me as I know how tired people can get after a show, I was reassured Kate is a night owl and she wanted to say hello. In the green room were the team who put ECHO BEACH together for me in 1987. The production team where Kate’s team, which I had forgotten!

It was almost overwhelming to see Kate after such an incredible performance. She wrapped her arms around me and kissed my face. We had a bit of catching up to do, the last time I saw her son Bertie he was 6 years old now he is a man. Agreeing to see her after the “madness has ended” I left on cloud nine and didn’t come off it until over the following week I told every member of KING CRIMSON how bloody fantastic it was!

The next day I flew to Philadelphia and joined the KING CRIMSON tour. Hubby and I had been apart for 6 weeks and when I got to the hotel the tour manager sent me up in the lift not knowing I need a room key to work the lift, so six rides up and down in the lift later I bump into Bill Rieflin and we eventually found Robert. Then we all went out to supper.

The next day I saw the band. My thoughts partly were on “how will this entertain after Kate Bush?”
I needn’t have worried. This was the best incarnation KING CRIMSON I have ever seen. It was like an unstoppable machine with so much colour, energy and VA VA VOOM I was laughing from beginning to end. The humour in their complexity was genius. Sheer genius!

I had a blissful week with my two soul mates. Robert, Bill and I consider ourselves family. We happily stick together like glue and Robert had the most fun I have ever seen him have whilst on the road! Robert loves to embarrass me at every opportunity especially in public. This started immediately when I overheard him and Bill ask a security guard in a chemist  “my wife is looking for the arse beauty department,” when these moments happen I run and hide, pretending not to know my companions but Robert always finds me and starts breaking wind very audibly whist following me around the shop.

Bill is no different, except he doesn’t break wind. Instead he just refuses to keep to the rules.

Every afternoon Bill and I would walk for two hours. This is part of Bill’s ongoing recuperation after an awful health scare three years ago. In Philadelphia we walked six miles before one show, which concerned me he’d be too tired for the evening but he was fine. When we reached the ART MUSEUM Bill decided that if he was only going in for a few minutes he wasn’t buying a ticket and he walked straight into the building telling the security so…….and he got away with it.

In Boston, Bill was more interested in the shops and wanted to see the Chanel store. Upon entering Bill was not shy about asking the staff to give him a tour. So there was Bill in his scruffy tour clothes and me in my Sunday best being shown the entire collection. I am convinced the staff believed he was a designer and I was his PA.

I needed to get back to the UK to prepare for the autumn shows. I have to say the last two weeks have been more testing than ever before. Having invested in a lot of new technology for my office which would allow me to broadcast and film…..none of it is working. Where I live some major building work down the street has resulted in the fibre optic cable being broken and this has stuffed my plans till all is mended. But I cannot blame that incident alone.

It appears I am toxic to the new world. Technology doesn’t like me. AND I don’t like it presently.

Really I’d totally understand it if I got banned from places of importance…hospitals, police stations, fire stations…….STEP AWAY FROM THE FIRE ENGINE WE NEED IT.

God I lament the simplicity of just sitting down and creatively writing for 8 hours and then at the end of the day opening the post and making phone calls.

GET ME ON THE ROAD WITH THE BAND AND OUT OF HERE!

We are doing quite a different set list. THE MINX tracks sound awesome!
There is a tour countdown now live here at this site too… keep your eyes peeled!

SEE YOU OUT THERE
BE PROUD, BE LOUD, BE HEARD