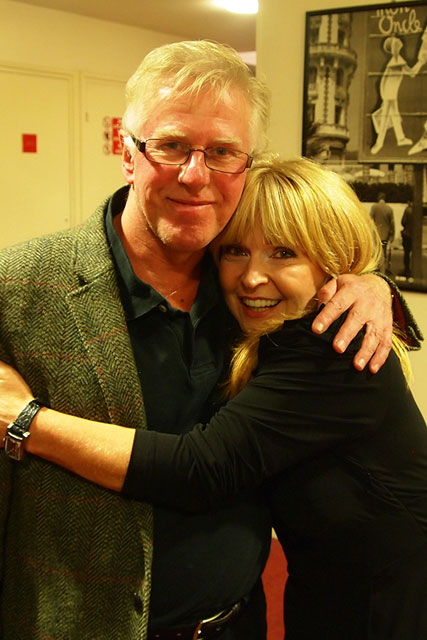 It is a matter of days now until the first LOVE IS THE LAW show. Interestingly I already know the songs inside out. Whereas The Changeling took months to learn, Love Is The Law is still firmly in my head from 1983………..one of the happiest and most fulfilling years of my life.

I love this album. I love the way we wrote it, Joel, Simon and myself setting up a studio in my house in Finchley and writing all day before a car would take me to the Mermaid Theatre to perform in the evening in Trafford Tanzi. Then after the show another car would collect me and take me to the Marquee Studios to record what we had written earlier.

My voice was strong and well rounded from the evening show. We would often record well into the dawn with me placing main vocals at 2,3,4 in the morning before I would finally flag, order a pizza and drift happily home to start all over again.

It was manic, high energy, joyous and unstoppable.

This album represents not only my happiest moments but also the life of The Angels And Demons and the few hundred strong who camped outside the theatre and those who followed us to the Marquee.

It was like a small encampment in the middle of London, a true Toyah Army who had such a zest for life. I’d come to the stage door in the interval of the show and hear the latest goings on, hear the latest gossip and witness strong bonds growing between certain individuals.

I’d also hear about arrests, drunken moments, lost possessions and broken hearts but it all seem to blend, mend and move on to the next adventure quite quickly.  This is how the title track LOVE IS THE LAW came about. We invited those who followed us to the Marquee into the studio around 2am one morning and we all stood around the microphones singing the chorus.

It was hysterical to start with because it was the first time most of the gang had been in front of a microphone but after one or two takes it all started to fall into place, thus the title track evolved.  It was a hot spring and even hotter summer, just perfect!

Out of all my albums this is really the only one I return to, to listen to for pleasure and to touch those incredible memories.  I have the same feeling when I hear Crimson Queen or any of the Humans albums………..just connection to happiness.

Thus when I compiled the set list for the tour and started to learn the new additions……..there was nothing to learn………it was already safely docked in my memory banks.This is a space ship of an album for me because it takes me out there whenever I climb aboard!

This September has been great, in fact 2013 is just getting better and better. Bill Rieflin came to stay. We took him to his first British Fete where we threw wet sponges at our best friend and had cream tea ……..as only the Brits can do.  We met up with Peter Buck in London and over an excellent meal on St.Martin’s Lane came to the conclusion that the HUMANS, Peter Buck, Bill, Fripp should all tour together, in small US rock clubs next spring.

About two months ago I had a brainwave to do with my husband. Mr. Fripp vowed never to perform live again about four years ago.  One morning whilst driving to a meeting I had an idea and I called Frippy…………

”What would it take for you to play again live?”
“I need to trust everyone around me, that photos won’t be taken, that I am left alone to just play!”
“Who would make that possible?” I said
“I have no idea”, Frippy replied.
“BILL. Make Bill your Musical Director! No one F—s with Bill!”

Then I took Frippy with me to perform at St. Georges Park where I am training weekly and they really sorted him out. Mr. Fripp soon realised his fears and quirks are suffered by almost everyone under pressure to perform and within 24 hours he was putting the new King Crimson together.  This is all very good for the HUMANS as it means in 2014 Bill will be mainly based in the UK………………… YERRRRRRRRRR………..we will be playing!

But I have to get through the rest of this year first.

I’ve just guest presented on BBC RADIO 4’s RAMBLINGS………..which I loved! Walking is my first real pleasure, quickly followed by eating. So to be asked to walk and explore someone else’s thoughts was exhilarating whist the microphone was dangled like a carrot in front of us, our producer walking so quickly I almost had to run to keep up! Loved it!

QUADROPHENIA had a screening at the Cine Lumiere in Kensington with myself, Phil Davis, Mark Wingett, Franc Roddam and Don Boyd present. The audience were mainly French and they were experiencing the film for the first time and it went down a storm, they loved it. I loved seeing so many of the team back together again.

The organiser said often at screenings there is some sense of tension between cast and production but with us it was like witnessing a happy family reunion as we all pulled our tables together in the green room and ate before the screening.

Franc Roddam told fantastic and cruel stories of being axed from major films and bullied by film execs, it made me happy to be in the safe little world of Toyahdom.

Don Boyd also produced me in The Tempest so there will hopefully be a screening of that to come as well as a film I made in 1993 called Anchoress, which is stunning and one of my best pieces of acting. Pete Postlethwaite played my husband.

2014 is dominating a lot of my time presently. I have never known a year shape up the way next year is shaping up. It is very comforting but it is also like being told when a tidal wave will happen and you just have to wait for it and be prepared.

I hope you get to see the tour. It will be fun as usual and all the TOYAH CLASSICS will be played. There’s four songs in the set that haven’t been played for 30 years!